“When you’re able to sit down at a table with people from other villages and share ideas—and then, on top of that, laugh and have a good time while you do it—that’s something special.”

This thought, expressed by former Cook Inlet Tribal Council (CITC) Board Member Harriet Kaufman of Tyonek, perfectly captures the essence of the Tribal Youth Symposium (TYS). This three-day annual event offers more than workshops and training; it brings together representatives from every corner of the Cook Inlet region to collaborate and share their best practices for working with youth.

The symposium was launched four years ago, when it became clear that the Tribes in the Cook Inlet region had several priorities in common—namely, youth, education and culture. “It just seemed like a good idea to have a conference so we could talk in a meaningful way about those things,” said Eric Watson, CITC village liaison and TYS organizer. 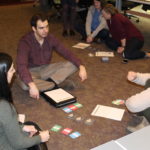 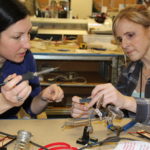 Kate Hohman-Billmeier (Seldovia Village Tribe) and Heather Rough, of CITC’s Education department, work on a project in the Fab Lab. 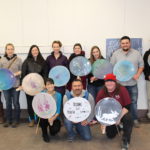 Participants in the 2019 Tribal Youth Symposium show off their traditional drums, made in the CITC Fab Lab during the symposium.

“The Culture Camp Roundtable is the reason we created this event and that’s the one thing we’ve offered consistently every single year,” Watson said. During the Roundtable, representatives from villages and Tribes across Cook Inlet region talk about what works for their respective youth culture camps and learn from each other’s experience.

“We see several communities offering to invite youth from other villages to their summer camps, and vice-versa,” Watson elaborated. “That’s what is at the heart of this symposium—that information sharing and partnership building.”

“It’s really inspiring to see what kind of amazing work is being done across the region, and to get excited about what more we could be doing in my own community,” said Kate Hohman-Billmeier, who came from Seldovia to attend her first TYS this year.

In addition to the popular Culture Camp Roundtable, TYS offers a range of activities and break-out sessions to encourage networking. This year, participants attended panels on healthy relationships and sex education and on summer employment; played The Thing from the Future (an imagination game that challenges players to work collaboratively to predict alternate futures); took part in a Tribal Partnership Training; and learned about effective communication. They even made healthy smoothies and wrote their own raps about respect.

A highlight of every TYS is a visit to the CITC Fab Lab (fabrication laboratory). This year, Fab Lab instructors helped attendees create their own traditional drums that illuminate when struck.

An annual resource fair complements TYS, bringing as many as 25 vendors that showcase other nonprofits and their programs, education centers, colleges and other opportunities.

Big—But Not Too Big

In four years, TYS has grown from 16 attendees to more than 38. The expansion of the symposium has turned it into a CITC-wide event, with all departments pitching in to help Watson organize and hold the three-day symposium. CITC Youth Advocate Lael Bach and Anna Morrison, from CITC’s Strengthening Our Youth program, co-hosted the event this year, and CITC’s Recovery Services Prevention Team helped with ice-breakers, activities and planning. CITC’s Executive Administration team also helped with logistics, organization and planning.

Although Watson is happy to see growing interest in the event among Tribes and villages, he hopes to maintain the close-knit atmosphere established by the very first TYS.

“The point of TYS is having a seat at the table for all our villages and making it meaningful,” Watson said. “It has expanded, but I’ve never wanted it to become this huge thing. With smaller groups and a more intimate setting, people can interact and get to know each other and build that rapport more than they could at a big conference.”

For more information about the Tribal Youth Symposium and other CITC resources for villages and Tribes, follow CITC’s Village Liaison Facebook page.