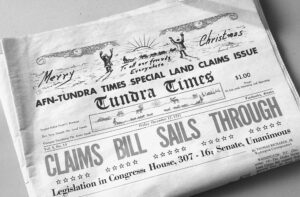 The Alaska Native Claims Settlement Act (ANCSA), signed into law Dec. 18, 1971, settled Alaska Native peoples’ aboriginal land claims and distributed 44 million acres of land and nearly $1 billion to 12 land-based Alaska Native regional corporations—including CIRI—and more than 200 village corporations. It enabled economic development across the state, including construction of the Trans-Alaska Pipeline System. And it empowered some 80,000 Alaska Native people who enrolled as shareholders to improve their lives through the support of culture, economic, heritage, health care and stewardship of traditional lands.

The Establishment of CIRI

One of the key mandates of ANCSA was the formation of 12 land-based, for-profit corporations that would represent 12 geographic regions of the state. ANCSA would provide seed capital and land to each corporation, and Alaska Native people born by the enactment date (Dec. 18, 1971) would enroll in regional and/or village corporations, receiving 100 shares of stock. With regional boundaries that roughly follow the traditional Dena’ina territory of southcentral Alaska, CIRI was one of those 12 original regional corporations, incorporated June 8, 1972.

CIRI is known as the “melting pot” of Alaska Native regional corporations, and virtually every Alaska Native group is featured among our nearly 9,100 shareholders—Aleut/Unangax, Alutiiq/Sugpiaq, Athabascan, Haida, Inupiat, Tlingit, Tsimshian and Yup’ik. The diversity of CIRI’s shareholders is a key to the company’s success.

While a significant percentage of CIRI’s original shareholders were of Dena’ina and Ahtna Athabascan descent, CIRI is the corporation of Alaska’s urban center, where many Alaska Native people relocated from other regions and subsequently enrolled with CIRI. Presently, approximately 40% of CIRI shareholders live outside Alaska.

Distributions alone cannot fulfill CIRI’s mission of promoting the social well-being and Alaska Native heritage of our shareholders. Since its inception, CIRI has provided financial support and worked with community partners to create and build a family of tribally designated organizations and affiliated community nonprofits that serve the needs of shareholders, descendants and other Alaskans, providing needed services and education programs that reflect traditional Alaska Native values.

ANCSA is a statute, not a treaty, and therefore establishes a balance between formalism and flexibility. ANCSA created self-sufficient Alaska Native corporations empowered to develop and utilize their resources to support current and future generations of shareholders’ needs through corporate growth, dividend payments, job creation, and other social and cultural services. While recognizing the positive impacts we have seen from ANCSA over the past 50 years, the importance of the next 50 years is critical for ANCSA’s continued success.

ANCSA has been adjusted over the years in certain ways, but its fundamental structure and vision have endured. No one person is responsible for ANCSA; rather, it was created by many acts of courage as people reached deep to accommodate these competing interests, and it is our collective responsibility to protect and continue to improve it. This remarkable agreement will continue to empower Alaska Native people by promoting health and wellness; instilling culture and heritage; aiding economic growth; respecting Alaska Native values; and balancing the needs of current and future generations of shareholders.

Alaska Native corporations will continue to have major cultural, economic and health impacts on Alaska. As we celebrate the passage of ANCSA on Dec. 18 and look ahead to CIRI’s own 50th anniversary in 2022, we pay tribute to those who worked so hard to bring about the profound changes that came with the passage of ANCSA. Collectively, we must honor the legacy of ANCSA and train our focus ahead on providing cultural, economic, educational and social benefits to shareholders, descendants and all Alaskans for the next 50 years.