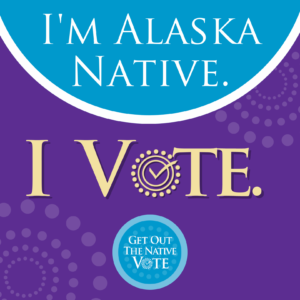 Get Out the Native Vote on Tuesday, Nov. 8

Midterm elections, or midterms, are elections held during the second year of a president’s four-year period in office. Many states also hold state and local elections in midterm years, so it’s critically important to vote to elect leaders and weigh in on ballot measures that will impact your community and our nation. Alaska Native voices can shape the future of our communities. Make sure your voice is heard by voting in the 2022 U.S. general election on Tuesday, Nov. 8!

As you plan your vote, some dates and deadlines to keep include your state’s:

For election dates and deadlines for each state, visit usvotefoundation.org.

Alaskan voters may rank more than one candidate in order of preference on their ballot, OR they may rank just one. Votes are tabulated in rounds, with the lowest-ranked candidates eliminated in each round until there are only two candidates left. The candidate who receives the majority of votes (more than 50%) in the final round is declared the winner.

Be sure to rank a candidate only once, and don’t give the same ranking to multiple candidates. Your vote only counts once. Your second (or later) choice only matters if your first-choice candidate receives the fewest number of votes and is eliminated, and so on for further rounds of counting.