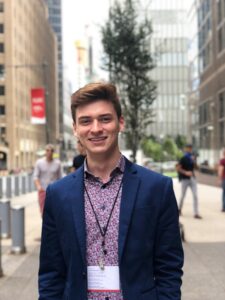 CIRI descendant Caleb King (Alutiiq/Sugpiaq) lives in the Midwest, but his heart belongs to Alaska. “I lived in Anchorage until I was 15,” he said, “and when I come back to Alaska to visit, oh my gosh, it’s always so energizing! To see the mountains in the east and the water in the west, to just be home and have some salmon and aguduk (Eskimo ice cream).

“The last time I was in Alaska, I didn’t see my family much because I was doing research,” Caleb continued. “But being home, even for a little while, is so great.”

Caleb hopes to parlay his passion for Alaska into a career in Tribal healthcare and he’s well on his way, currently majoring in neuroscience at Indiana University Bloomington, and having just finished an internship at the Neitz Vision Lab at the University of Washington where he researched the molecular biology of human retinas.

Caleb is connected to CIRI through his paternal grandmother, original enrollee Katherine Gottlieb, who serves as president and CEO of Southcentral Foundation (SCF). His parents are CIRI shareholder Timothy Grosdidier and Magen Butler, and through his father, he is also a descendant of Koniag Inc. and Seldovia Village Tribe.

Caleb said he grew up with strong ties to his Alaska Native culture and heritage. “I’m really close with my grandmother, and she taught me what it means to be CIRI, to be an Alaska Native person,” he explained. “I was taught that if you have extra salmon, send it to your family. If you have extra food or resources or can provide help to someone, you do it.”

At Indiana University, Caleb was instrumental in establishing the Native American Student Association (formerly the Indian American Association), whose goal is to help Alaska Native and American Indian (AN/AI) students strengthen and express their Indigenous identities. “There are about 50 Native students here, so we’re about .1% of the total student population,” he said. “The original club was divided into undergrads and graduate students, which didn’t make sense given that there are so few of us. Now there are enough of us to be an organization, and we’re loud enough to have a voice.

“We’re still small, so we rely a lot on collaboration with big student governments and other minority student governments to push anything forward, which is a good thing,” Caleb explained. “For instance, we partner with First Nations to do the on-campus powwow every year, which is really exciting. Our event in April drew 2,000 attendees.” 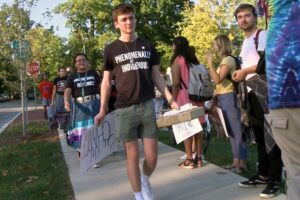 The association also hosts informative events, and Caleb personally attends health-related classes on campus to teach about Indigenous health care and AN/AI voices inside health care. “I call it an excellence workshop,” he said. “We talk a lot about disparities, but not enough about some of the really excellent things Native people are doing.”

In 2018, Caleb worked with the Bloomington Office of the Mayor to proclaim Oct. 8 as Indigenous Peoples’ Day. “It had already been changed from Columbus Day to Fall Holiday in Bloomington, but the city hadn’t taken the step of recognizing Indigenous people,” he explained. “There are about 750 student organizations on campus, and I worked with 15 of the largest ones to get their support and add their signatures to a petition, which was then sent around the city of Bloomington. We staged an event, which was originally set to be kind of a protest march, and I invited the City Council, the mayor, the Rotary Club—anyone I felt had a stake in the issue, to attend the event.

“It was a very peaceful, welcoming environment,” Caleb recalled. “The march started at IU and ended at the courthouse. Then, the Friday before Oct. 8, I got a call from the Mayor’s Office saying they were proclaiming Indigenous Peoples’ Day and would like me to join them in a celebration. It was amazing. Bloomington was the first city in Indiana to do it.”

Caleb’s focus on policy and having the courage to change the status quo was nurtured at SCF, where he interned with the RAISE program from 2014 to 2018. He said he started out sweeping floors and making coffee, eventually working his way up to policy research and data projects. “My last year at SCF, it was the summer after my first year of college, I was paired up with Dr. Steve Tierney,” he said. “I was able to work on more substantive issues, such as talking with investors about how they could integrate our systems into their own health care systems. It was a fun way to use the knowledge I had for something that was important to SCF.” 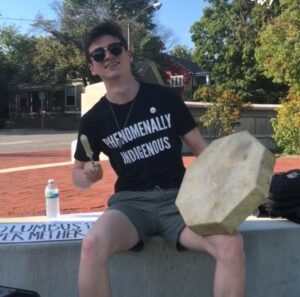 Caleb’s work with SCF helped earn him a 2019 Udall Undergraduate Scholarship, a congressional award given to college sophomores and juniors committed to careers in the environmental, Tribal policy or AN/AI health care fields.

“The reason I’m studying neuroscience is to better understand addiction and how to be a better physician in handling addiction, because it’s something as a primary care physician I know I’ll have to deal with a lot,” Caleb said. “It’s a pressing need not only in Indigenous populations, but in all populations right now.”

Caleb’s dream is to work at SCF’s primary care clinics, “working one-on-one with my people.” Eventually, he would like to go into politics.

In his spare time, Caleb enjoys working out, hiking, road trips with friends and learning the Sugpiaq language. As for young people who would like to connect with or develop a deeper understanding of their AN/AI culture, “I think virtually every Indigenous person my age feels some sort of disconnect,” he said. “I’ve seen a lot of Indigenous students come through who want to become part of the Native American Student Association but feel like they aren’t Native enough, like they don’t know enough to be part of the community. But community isn’t about how much you know, or if you have a grandparent who taught you the language, or you grew up on a reservation—it’s just being open to learning where you come from. A lot of constraints are self-imposed. Don’t have those constraints! Take control of your future and ask people for help along the way.”