CIRI Descendant Rebecca Taylor’s (Inupiaq) art allows her to both create and release, connect with the past and exist in the present moment. Whether it’s beading, carving or sewing, “I’ll try anything,” she said. “Lately, I’ve been making earrings out of sealskin and doing some soapstone carving. I’ve dabbled in ivory and scrimshaw and linocut printing. I’m hyperverbal in some ways; I can talk too much and overexplain things. That’s what’s calming about art: it’s the way my mom would teach us things without saying as much.”

Rebecca is connected to CIRI through her great-grandmother, the late Rosie Annie Omelak, whose family hails from White Mountain, Diomede Island and Solomon, Alaska. Rebecca’s parents are Rose (Omelak) Taylor and the late Brian Taylor. Her parents met in Fairbanks, Alaska, and moved to Smithers, British Columbia, before Rebecca was born.

“My dad was kind of a hippie—I guess my mom was too,” she laughed. “My dad’s parents are American, but he grew up in Canada. When he was 18, he decided he wanted to raft the Yukon River with a couple of friends. He met my mom in Fairbanks at the end of that trip, and they moved together to Smithers.”

Rebecca said she knew other First Nations people growing up in Canada, but she and her mother and two sisters were the only people of Inupiaq descent in their community. Rebecca self-identifies as Eskimo; it’s a word she heard her mother and great-grandmother use growing up, but when she started school, “I always got corrected and made to feel bad about it,” she recalled.

“If someone is raised by a Native person, and that person was raised by a Native person, there’s always going to be all those things, even from the time you’re a baby, that inform how you see the world—whether it’s language or mannerisms or how you relate to others,” Rebecca continued. “Growing up, I didn’t recognize it as anything, but I later learned, and was able to identify, those things my mom taught us that were culturally specific.”

Rebecca’s mom preferred to sit or kneel on the floor rather than on furniture. She greeted others in a familiar way, as she would have done in the village. And she taught her daughters to learn through observing, what modern psychology refers to as “observational learning.” 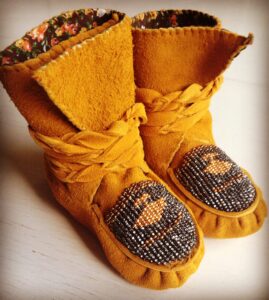 “My mom always made things,” Rebecca said. “She worked as a horse trainer, so she sewed a lot of Western-style shirts. She painted antlers and drew a lot. Her grandmother, the one who raised her, made a living making and selling Eskimo dolls. Growing up, we had squirrel parkas and caribou mukluks and really nice things she made for us. I have a voice recording of my great-grandma saying that because of her arthritis she can’t sew and she misses it, and that it made her feel so lonely. I’m named after her—my Inupiaq name is Anewna—and that’s why I feel like I’m channeling my great-grandmother when I make things.”

Rebecca holds bachelor’s and master’s degrees in social work from the University of Victoria, the latter with an Indigenous specialization. She did much of the research for her master’s degree in Alaska, combing through historical archives and studying her family’s history.

“I think when people seek things out in school or in life in general… I mean, I knew I wanted to help people, but looking back, I think I wanted to understand how to help myself and my family more than anything,” Rebecca shared. She also uses her family’s stories and Alaska Native and Inupiaq history to inspire her artwork, unearthing old stories and deepening her present-day relationship with them through creating.

Rebecca is a 43-year-old mother of a grown daughter and a school-age son. She resides in Victoria, British Columbia, and hopes to one day live in Alaska and learn the Inupiat language. She began sewing mukluks in her early 20s and delved deeper into Alaska Native art as a way to “heal through creating” after a particularly challenging caseload at her social-work job. She has led sewing workshops in Canada and recently taught CIRI Next Gen Day participants how to make traditional Eskimo yo-yos.

“In the Inuktitut language, there’s no word for ‘artist’—the closest approximation is a word that means ‘pretend work,’” Rebecca said. “I can relate to that, because art gives you freedom. It’s the way my mom and great-grandmother passed on knowledge without words. In the pauses, in the spaces without words, they were teaching us how to create.”