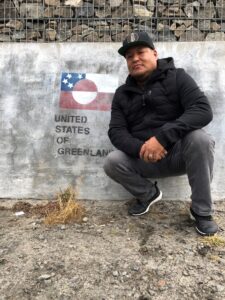 From an air-conditioned trailer in the Iraq desert, CIRI descendant Torin Jacobs (Inupiaq and Yup’ik) started making the beats that would define him as a hip-hop artist, electronic musician and producer.

“My father was a disc jockey at KYUK radio in Bethel, Alaska, so I grew up listening to music—Motown records, stuff like that,” Torin recalled. “When I was in high school in the 1990s, there was a pretty strong resurgence with kids learning about Alaska Native culture. I joined a Yup’ik dance group, which was instrumental in getting me to appreciate my Alaska Native heritage because I was able to connect with a tradition that goes back many generations.”

Torin is connected to CIRI through his paternal great-grandfather, original enrollee Jacob Kenick, whose family hails from Shaktoolik, Alaska, a village located on the east shore of Norton Sound. Growing up, Torin divided his time between Bethel and his mother’s hometown of Philadelphia.

Torin’s passion was rapping, “but I couldn’t find any beats that represented who I was as an Alaska Native person,” he said. “Those sounds—of Native drummers and singers, or even nature sounds, things we can identify as part of our culture, like animal sounds—it’s distinctive; there’s nothing else like it.”

A beat maker composes music by programming instruments, percussion and various sounds. Sometimes beats are composed of pieces of existing music that is manipulated, called sampling. Essentially, a beat is the rhythmic and melodic backbone to a song that much of modern music is built from. Beat makers often work behind artists to help them create their sound.

“Hip-hop music is sample based, and a lot of it comes from DJs cutting records together— taking the nicest-sounding part of a record or something that’s really catchy and looping that and making it the beat or the primary sound,” Torin explained. “That’s all sample-based music, unlike composing songs from scratch where you’re coming up with a melody and chords and whatnot. When it came to hip-hop beats, I couldn’t find anything close to what I would describe as having an Alaska Native sound.”

After graduating high school in 1995, Torin moved to Chicago for college. “I was not a solid student,” he chuckled. “I was not interested in the path I was taking and needed a break. That’s when I decided to join the Marine Corps.”

Despite his twin brother’s protestations (“He was already in the Marine Corps and when I called to tell him I’d signed up, he was like, ‘Noooo!’’), Torin described the five years he served as “one of the greatest experiences of my life.” He worked in information security, and it was during a 10-month stint at Camp Fallujah in Iraq that he downloaded some computer software “and started getting busy making some beats.”

“I had asked a beat-maker out in San Diego to put something together for me. It was amazing, and I thought, ‘I can do that!’ That’s when I started making beats myself.”

Torin’s early beats featured samples from the Alaska Native musical group Pamyua. He soon branched off into creating his own beats featuring Alaska Native sounds like Inupiaq drumming, Yup’ik songs and Inuit throat singing. “I really gained attention when I started making my own beats,” he said. “I started making beats back in 2004 and now it’s 2021. It’s almost been 20 years since I began doing this, and even now, if you try to find Alaska Native beat makers, good luck; it’s still hard to find. Whatever I can do to inspire and bring people into the art is what I intend to keep on doing.”

In addition to his musical pursuits, Torin is the proud husband of Lena and father to Torin Jr., Daveon, Chazz, Enaaseyh, Ayani and the late Seketl’e. He has been a stay-at-home parent the last seven years and has been helping his two daughters navigate online learning through College Gate Elementary’s Yup’ik language immersion program since last spring.

As a rapper and beat maker, Torin has performed at the Smokehouse Gala to benefit First Alaskans Institute and in 2019 presented to youth participating in the CIRI C3 Experience. In late 2020, Torin and one of his sons organized and presented a virtual workshop on beat making at the Alaska Federation of Natives Elders & Youth Conference.

“This is the second time I’ve done it, but it was first time I’ve done it with my son,” Torin said. “It got a lot of kids excited, and I saw a lot of comments saying they loved the presentation. That kind of feedback lets us know this is the right thing and we should continue moving in this direction. It hasn’t been easy, but I feel called to do it. I really love music and wish I had gotten started at an earlier age, but I can’t let that deter me from doing what I love. I’m just going to focus my energy and resources toward producing original pieces and hopefully inspire others to do the same.”