For the past 10 years, CIRI’s Fire Island Wind (FIW) Project has delivered renewable, emissions-free energy to more than 7,000 homes in Southcentral Alaska. FIW represents the area’s first utility-scale independently owned wind project, and it helped redefine the future of energy in Cook Inlet and beyond.

“Fire Island Wind is important to CIRI for so many reasons,” said Suzanne Settle, vice president, CIRI Energy, Land and Resources. “It was the first project CIRI developed and constructed on its own, and it put us on the map for additional investments in the clean energy industry.”

FIW took more than a decade of planning. Various regulatory and other issues—including navigating the complexities of a power-purchase agreement and removing and rebuilding a key navigational aid for the nearby Ted Stevens Anchorage International Airport—hindered progress, but CIRI never lost sight of its goal of offering a competitively priced, renewable addition to Southcentral Alaska’s energy portfolio.

“We live in this community and care about our carbon footprint,” Settle continued. “Because Fire Island Wind was important to us as a corporation, we stuck with it and saw it through, even when it was challenging.”

The Regulatory Commission of Alaska approved a power purchase agreement between Fire Island Wind and Chugach Electric Association, Alaska’s largest electric cooperative, on Oct. 10, 2011, which cleared the way for the construction of FIW. Parts and equipment began arriving in Anchorage in the spring of 2012, and the project commenced commercial operation on Sept. 24, 2012. 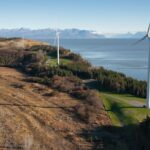 The Breakneck Hill ski area was built by USAF volunteers in their spare time.

Fire Island AFS was a continental defense radar station constructed to provide early warning of an attack by the Soviet Union on Alaska.

In 2016, Fire Island Wind was lauded by General Electric Company as one of the top four wind energy projects in the U.S.

“Fire Island Wind is important to CIRI because it was really the launch of our efforts to acknowledge and move in the direction of sustainable, clean energy for Alaska,” CIRI President and CEO Sophie Minich said. “Alaska doesn’t have state-mandated renewable energy targets that power companies must meet, but every day brings with it new evidence of climate change in our communities, especially in our rural communities. As an Alaska Native corporation, CIRI recognizes we have a duty to continue responsible stewardship of our lands so that future generations of Shareholders and Descendants not only profit from our investments but continue to practice the customs and cultures of their ancestors.”

FIW currently consists of eleven 260-foot-tall turbines whose blades sweep an area greater than an acre. CIRI has the capacity to expand the project and generate enough power to meet the needs of some 28,000 homes and businesses.

For a 10th anniversary video of the Fire Island Wind Project, scan the QR code or visit ciri.com/fiw10

The History of Fire Island