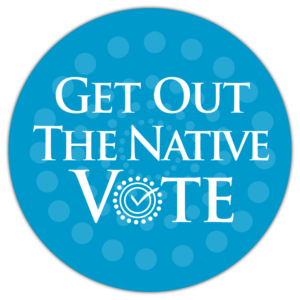 This year, all 40 seats in the Alaska State House of Representatives and 10 seats in the Alaska Senate are up for election. There has arguably never been a more important time for Alaska Native voters to make their voices heard. And Cook Inlet Tribal Council (CITC) is encouraging Alaska Native people to do just that, through a new partnership with Get Out the Native Vote (GOTNV).

“This is an important time for Alaska Native people to expand civic engagement and have real impact through voting,” said CITC President and CEO Gloria O’Neill. “It’s an exciting opportunity to foster leadership and to create lasting change within the systems that affect people’s lives every day.”

This June, CITC acquired GOTNV as an affiliate nonprofit in an effort to bolster GOTNV’s sustainability and to expand impact for both organizations.

“With the work we do at CITC and the reach we have in our community, our affiliation with GOTNV is a natural fit,” said CITC Chief Administrative Officer Tabetha Toloff.

As an affiliate of CITC, GOTNV will be able to tap into CITC’s existing relationship with Alaska Native people in the Cook Inlet region and build upon previous successful statewide efforts.

“We’re able to make connections with people through the programs we have, as well as with the statewide stakeholders already engaged with and supporting GOTNV,” said Nikki Graham, director of Alaska’s People at CITC. “That’s a valuable voting base that can create real change in our state when their voices are united.”

In a year when COVID-19 threatens to disrupt voting, CITC is already considering becoming an easily accessed polling place this election cycle. GOTNV will allow the organization to support Alaska Native voting and civic participation in other ways, too.

GOTNV’s goals — including raising civic participation among Alaska Native people and continuing voter registration efforts — align with CITC’s “ThriveAbility” plan, which envisions a world in which Alaska Native people are self-determined and create their own future. There is no greater tool, perhaps, in helping create the future than by being civically active.

A Fight for Equality

While there are other organizations supporting outreach under the GOTNV identity, this iteration of GOTNV is a nonpartisan campaign that was initiated by the ANCSA Regional Association in 1999. Among its several voting-related goals, the organization fought to ensure that every qualified voter across the state would have the opportunity to cast a ballot on Election Day.

Access to easy voting, the right to make one’s voice heard: These seem like struggles from an earlier era, challenges chronicled in history books. But as recently as 2019, battles were being fought to ensure that all Alaskans, including Alaska Native people living in rural areas, have easy access to polling places and to materials in their Native languages.

“Alaska has a long history of problems ensuring the rights of Alaska Natives to vote,” stated a 2019 report on Alaska Native voting rights authored by the Alaska Advisory Committee to the U.S. Commission on Civil Rights. In 1915, Alaska Native people who wished to vote in state and federal elections were required to provide “endorsements” from at least five white citizens before they could do so. As the report relates, “This posed the difficult question of choosing between participating in the democracy or retaining one’s identity and cultural ties.”

In 1924, the Indian Citizenship Act was passed, granting citizenship to all Native Americans born in the U.S. The Alaska Legislature swiftly responded by enacting a law that required an English literacy test as a prerequisite to voting — essentially a form of educational discrimination against Alaska Native people, many of whom either had limited English proficiency or exclusively communicated in their Native language.

“For Our People, there’s a lot of history of inequality around voting rights,” Graham said. “The message of GOTNV is that voting is not for the privileged — it’s for everyone.”

GOTNV aims not only to ensure that all Alaska Native voters are able and encouraged to vote, but to empower Alaska Native people to express a strong voice on statewide issues, to become more civically engaged — and to run for office themselves.

“Too often, local, state and federal governments make decisions that affect every citizen, often without Native people at the table,” O’Neill said. “It’s important that we exercise our rights, make our voices heard, and continue the fight for equality that so many Alaska Native leaders have pushed forward. We can do this by promoting civic engagement and Alaska Native leadership at all levels of government.”