In a long-awaited and emotional ceremony, CIRI and its village corporations came together March 1 for an historic land transfer. CIRI President and CEO Sophie Minich signed the deed transfers for more than 230,000 acres that now become village corporation land more than 40 years after passage of the Alaska Native Claims Settlement Act (ANCSA). The transfer of the 12(b) deficiency entitlements, owed to the villages under ANCSA, ends several decades of litigation and disagreements.

“This is an historic day for the villages in the CIRI region,” Minich said. “It has not been easy getting to this point, but working together, we finally did it. I commend the villages for their cooperation and I’m confident this renewed spirit of collaboration will benefit the villages and CIRI for decades to come.”
Due to existing land ownership and competing entitlements owed to the State of Alaska at the time ANCSA was passed, some village corporations were unable to select land with geographic ties to their traditional villages. This resulted in lands, referred to as 12(b), that could be selected from other areas within the Cook Inlet region. These lands were held by CIRI for the village corporations’ benefit until they agreed on a process to make land selections. Due to the prior lack of agreement, the selection process was delayed for decades. The delays prevented the village corporations from managing the lands and receiving economic benefits.
“It’s huge. I think everyone is just thrilled,” said Greg Encelewski, president and CEO of Ninilchik Natives Association, Inc. “I was involved in the original land selections for Ninilchik and I never dreamed that 35 to 40 years later I would be coming back still selecting lands. There is a big sense of relief to finally get this done.”
On your mark… get set…. SELECT!

A month before the deed transfer, in a scene filled with all of the excitement and tension of an NFL draft, Cook Inlet village corporations gathered at the CIRI building in Anchorage Feb. 1 to make the land selections. All of the villages had agreed on the process of selection.

After weeks of meticulously analyzing the maps of available lands, representatives of six CIRI village corporations filled the conference room on the first floor of the CIRI building. Villages pulled numbers from a hat to determine the selection order. The clock was set. For each round, five minutes would be allowed for each corporation to make their selection. Then the selections began.
“We spent days and days looking at the maps and planning. We had a strategy going in and we had prioritized each selection. When it was our turn, it was easy to go down the list and grab the top choice,” Encelewski said.
For Encelewski and the Ninilchik Natives Association, it wasn’t just the preparation that paid off. A little luck helped, too. Ninilchik won the right to choose first and selected the land that many expect to be the most suitable place for a deep water port to be used by the Pebble Mine, if ever developed, or other potential projects. Encelewski said he realized Ninilchik wasn’t the only village interested in that same tract because, upon making his selection, he heard the good-natured comment “you just sank my battleship” from one of the other villages. Other areas of interest were lands in the Talkeetna Mountains where the Susitna-Watana Hydroelectric Project is proposed.
The amount of acreage each village was allowed to select depended on how much a village was able to select in its 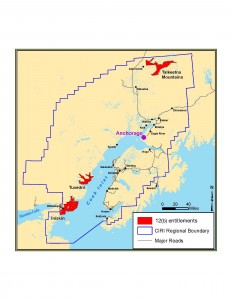 original entitlements. For example, Chickaloon and Knikatnu each received 1,280 acres of the 12(b) lands while Tyonek could select more than 78,000 acres (See table for breakdown of each village’s entitlement). Encelewski said the 12(b) land selections amount to 40 percent of Ninilchik’s land. Eklutna received their full amount of land through its original entitlements; therefore, Eklutna wasn’t included in this recent 12(b) selection process.
A new era of cooperation
The 12(b) selections bring to a close a long and, at times, contentious relationship between CIRI and its village corporations. The cooperative process to resolve the land issue, led by CIRI, to bring this chapter to a close helped many realize the benefits of working in collaboration for the good of all.
“Finally people realized that we’re all in this together,” Encelewski said. “We often have joint land ownership. We have joint permitting processes. And so, to me, it’s going to go a long ways to improving relationships. It’s a new day and a new beginning and I think it’s very positive.”

A month after the 12(b) selections were made, the CIRI lands department expedited the transfer of ownership, resulting in the signing ceremony March 1.

“What has happened over the last year, and particularly what happened last month, is a testament to the power of the Alaska Native people when we work together,” said Ethan Schutt, CIRI senior vice president of land and energy development. “It gives me great pride to work with you and on your behalf. This conveyance will empower you all to realize the economic potential of your heritage lands.”
Section 12(b) Deficiency Entitlement