Violet L. Kroto passed away May 14 at home in Tyonek, Alaska. Ms. Kroto was born May 31, 1942. During her life, she cared for many children – both her own, and those she took in from the foster care system. She is survived by her children, Allen Bismark-Nickanorka, Ted Kroto, Marvin Kroto, Joann Kroto-Gonzalez, Laura Kroto, Sharlene Rooker, Vide Kroto and Hayden Kroto. 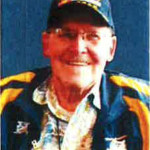 Kenneth Clarence Lowney passed away July 7 at home in Anchorage. Mr. Lowney was born July 21, 1932, in Anchorage and grew up in the Jesse Lee Home in Seward. A U.S. Air Force veteran, he served in the Korean War and in 2015 participated in an Honor Flight to Washington, D.C. He is survived by his wife, Alice Lowney; children, Russell Lowney, Tammy Parker and Lois Walter; grandchildren, Kenny Lowney, Kayla Richardson, Saun Koby, Rachel Maxwell and Kristi Bloomstrom; and great-granddaughter, Miah Bloomstrom.

Matthew Shane Rivenburgh passed away April 29 in Port Henry, N.Y. Mr. Rivenburgh was born June 20, 1969, in Anchorage. He is remembered for his love of fishing and sports, and for his many years serving others as a registered nurse. He is survived by his wife, Francine Rivenburgh; stephildren, Emily Steele (Jonathan), Heidi Woelm (Paul), Jesse DiRenzo (Elizabeth) and Nathan DiRenzo (Hannah); parents, Frank and Cathy Rivenburgh; brothers, Cody and Tanner Rivenburgh; sister, Cindy Rivenburgh; and 10 grandchildren, many aunts, uncles and cousins.