Original CIRI shareholder Charlene Alex Shaginaw recently completed a project honoring her father, the late Herbert Alex (Dena’ina Athabascan), who served as vice president of the Native Village of Eklutna from 1961 until his death in 1971. Along with two other servicemen, Mr. Alex died in a military airplane crash in the Wrangell Mountains in eastern Alaska. Their bodies remain at the crash site. In March, Ms. Shaginaw contacted the Fort Richardson National Cemetery (FRNC) with a request for a memorial interment of her father. With FRNC’s assistance, a headstone was placed Sept. 10, and a graveside service is planned for July 2021. FRNC is located on the Fort Richardson U.S. Army installation near Anchorage. The site address for Mr. Alex’s headstone is MB 16. 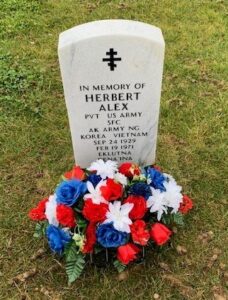