The late Herbert Alex (Dena’ina Athabascan) served as vice president of the Native Village of Eklutna from 1961 until his death in 1971. Along with two other servicemen, Sgt. Alex died in a military airplane crash in the Wrangell Mountains in eastern Alaska. Their bodies remain at the crash site. In honor of Veterans Day, the Alaska National Guard Public Affairs office published an article about Sgt. Alex entitled “Sgt. 1st Class Herbert Alex: An Alaskan Legacy.” The article may be accessed at dvidshub.net/news/382799/sgt-1st-class-herbert-alex-alaskan-legacy. The late Sgt. Alex is the father of original CIRI enrollee Charlene Alex Shaginaw. 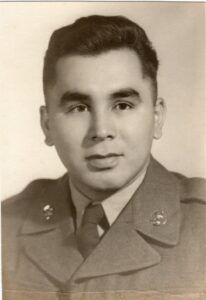