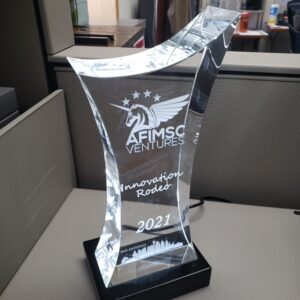 Each year, AFIMSC Ventures, the center’s innovation office, holds an “Innovation Rodeo” to help Airmen and civilian members of mission-support groups around the world pitch ideas, partner with innovation experts and secure funding for their respective projects. Finalists compete for a share of $1 million in award money and additional resources to pursue their ideas.

In 2021, out of 370 submissions, eight finalists were chosen. One finalist was Scott McClure, an electrical engineer with North Wind Site Services (NWSS) who is stationed at Joint Base Elmendorf- Richardson (JBER) in Anchorage. McClure teamed with Capt. Nathanael Kohl and Master Sgt. Luke Rogan on a multi-phase strategic plan for modeling Air Force facilities in 3D. The project ultimately earned the team third place.

A Modern Solution to an Age-Old Problem

The bulk of Air Force civil engineer projects currently depend on AutoCAD data, photos and drawings that are often incomplete, outdated or inaccurate. McClure and his team’s proposed 3D interior scanner project would incorporate high-resolution, 360-degree cameras and 3D scanners to catalog the projects—technologies that may be used to establish an accurate library of 3D real-property files at a fraction of the time and cost. The new technology would also integrate seamlessly with cloud-based solutions. As part of the Innovation Rodeo, the team spent a week learning from leading innovators before successfully pitching their idea to a board of senior AFIMSC support leaders. In addition to start-up funding, AFIMSC Ventures offered to assist the third-place-winning team in the development, funding and implementation of the project.

“Three-dimensional digitalization of facilities could ultimately result in substantial efficiencies and maintenance savings for more than 55,000 Air Force facilities worldwide,” Waller continued. “Scott has taken his concept from inception to solicitation and is currently evaluating 19 industry proposals. This represents an exceptionally competitive pool and an impressive early success.”

Founded in 1997, North Wind Group (NWG) has grown to a group of companies that employ more than 1,750 scientific, engineering, management and professional personnel. Headquartered in Idaho Falls, Idaho, NWG has been a wholly owned subsidiary of CIRI since 2010. North Wind Site Services, one of 15 NWG companies, provides engineering, program management and environmental-remediation services. Learn more at northwindgrp.com.