Sophie Minich became CIRI’s president and chief executive officer in January 2013. In this capacity, Minich is responsible for the development and implementation of the company’s corporate strategies, programs, policies and procedures. She oversees all the company’s business operations and is the primary contact with the company’s stakeholders.

Minich, who is of Athabascan descent and a shareholder of both CIRI and Doyon Limited, grew up in Seward, Alaska. She joined CIRI in 1993 and has served as chief operating officer, senior vice president of business development, chief financial officer, vice president of administration and director of accounting. She also served as president and CEO of CIRI Alaska Tourism Corporation.

Currently, Minich serves on the ANCSA Regional Association Board of Directors, the Anchorage Homelessness Leadership Council, the University of Alaska Anchorage College of Business and Public Policy Advisory Board, and the Premera Board of Directors. Minich is a former member and chair of the Anchorage Economic Development Corp.’s board of directors and a former director of the Seattle Branch of the Federal Reserve Bank of San Francisco. She has also previously served as a trustee of Alaska Regional Hospital’s board of trustees, and as a trustee for the CIRI Elders’ Settlement Trust. 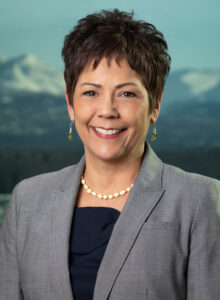