The geographic boundary of the CIRI region, shown below, closely approximates the traditional homeland of the Dena’ina Athabascans. Within the regional boundary are villages and group sites recognized under the Alaska Native Claims Settlement Act. In addition, within the regional boundary is the Municipality of Anchorage, Alaska’s largest urban center. Anchorage is often referred to colloquially as the largest Alaska Native village because of the large number of Alaska Native people who live within the municipal boundaries.

There are seven villages in the CIRI region. The Dena’ina villages of the region are Eklutna, Knik, Tyonek, and Salamatof. The people of Chickaloon are a mixture of Ahtna and Dena’ina Athabascan. The people of Ninilchik and Seldovia have ancestors of Aleut and Alutiiq descent, as well as some Dena’ina.

The Alaska Native Claims Settlement Act also recognized two other categories of Alaska Native localities–groups, which had smaller populations of Alaska Native people than villages, and four cities with significant Native populations but considered urban (Kenai, Kodiak, Juneau and Sitka). The groups within CIRI’s regional boundaries are Alexander Creek, Caswell, Gold Creek, Montana Creek and Point Possession. Kenai, of the four cities named in ANCSA, also lies within CIRI’s regional boundary and is the home of many people of Dena’ina heritage. 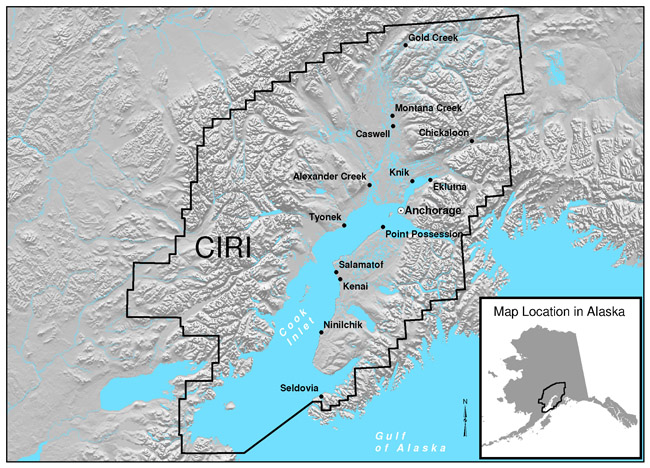 Popular land areas include the following:

Hunters & anglers may contact the Alaska Department of Fish and Game for game management unit boundaries. All federal, state and local regulations and laws apply to any CIRI land used.