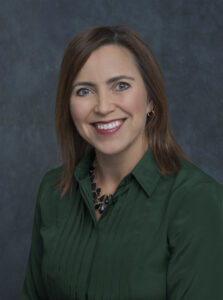 For CIRI shareholder Rebecca Louie (Tlingit/Aleut), working in affordable housing is more than just a job—it’s a way of combating “the injustice that comes from being low income and doing what I can to help,” she said.

Rebecca grew up in Anchorage the youngest of six children. While she enjoyed a middle-class upbringing, attending college out of state opened her eyes to issues of social injustice facing our communities. “I’ve always had an interest in community development, trying to figure out ways to improve communities, especially for people who are low income,” Rebecca said. “I’ve just always had that goal.”

She earned a bachelor’s degree in urban studies and planning from the University of California San Diego, followed by a master’s degree in city and regional planning from the University of California Berkeley. “The CIRI Foundation was a huge help to me throughout college,” Rebecca shared. “I received scholarships every year I attended school, and I always strived to keep my grades above a 3.5 GPA so I would be eligible for the Excellence Annual Scholarship. That was my motivator in college. It was an enormous help to have those scholarships coming in.”

Rebecca is an original CIRI enrollee. Her mother’s family hails from Southeast Alaska, primarily from the Juneau, Sitka and Tenakee Springs areas. Her father moved to Anchorage in the 1950s. Rebecca grew up with a “strong connection” to her Alaska Native heritage, attending CIRI’s Friendship Potlatches and spending time with her Alaska Native relatives. “Traditional Alaska Native values— showing respect, sharing what you have, taking care of others—were absolutely instilled in us,” she recalled. “Our house was always open to any relative who needed a meal or a place to stay.”

Rebecca’s mother worked as a midwife, attending to more than 1,000 births. “She never made a dime doing it; she called it—pun intended—her ‘labor of love,’” Rebecca said. “She and my father both had a spirit of wanting to help people, and it was instilled in their children.”

Rebecca parlayed the traditional Alaska Native values she grew up with into a career focused on the affordable housing industry. She spent six years working on housing and social-equity issues at the San Diego Association of Governments, followed by stints in fundraising and development for a San Diego nonprofit and at the United Indian Nations, where she coordinated the development of housing and cultural resources for Native American people living in the San Francisco Bay Area. In 2008 she joined Wakeland Housing & Development Corporation (Wakeland), rising through the ranks to become the vice president and chief operating officer (COO).

Founded as a nonprofit in 1998, Wakeland works with municipalities, developers and redevelopment agencies throughout California to acquire, develop and rehabilitate affordable housing. Since its founding, the organization has created more than 7,500 affordable homes at 51 properties throughout the state.

“Wakeland focuses on housing for low-income families, low-income seniors, and recently we’ve been constructing housing for people who have experienced homelessness or people who’ve experienced homelessness who might also have a serious mental illness or another special need that might require assistance to live independently,” Rebecca said. “In addition to housing, we also provide services to help our residents gain independence and meet their goals—after-school programs, financial literacy classes, cooking classes.”

As the COO, Rebecca assists in site selection, financing and overseeing housing development, and supervising the department that services and manages the department. While she admits her job is “pretty all-consuming,” the rewards far outweigh the challenges. “I’ve gotten to see people move in literally off the street into our projects,” she said. “I’ve seen people with serious disabilities who’ve been living on the street, in wheelchairs, in walkers—you see these people move in, and within days of having a door that closes and a bed they can sleep in and access to indoor plumbing, this extraordinary transformation starts to take place.”

While COVID-19 has impacted almost all Americans in some way, those with the lowest incomes have been the hardest hit. High rates of unemployment, shelters that have closed or severely limited services, and an increase in the number of renters at risk for eviction have exacerbated the U.S. homelessness and affordable-housing crisis. In San Diego, where the median home value is $829,000 and the unemployment rate is higher than the national average, more than 100,000 low-income renters do not have access to affordable housing.

When the COVID-19 pandemic hit, Rebecca and her staff—who she describes as “the most mission-driven and hardest-working group of people you’ve ever seen”—shifted their focus from providing services like after-school programs and credit repair to meeting their residents’ basic needs. “That was really the big shift,” she said. “Trying to acquire the basics—food, masks, toilet paper—and then figuring out how to stave off isolation and engage our residents.”

Outside of work, Rebecca is a busy wife and mother to two school-aged daughters. She has received an Innovations Award from the San Diego Housing Federation for her development of a training program for staff at supportive-housing communities, and she was named one of San Diego’s Most Influential Women of 2019 by the San Diego Daily Transcript.