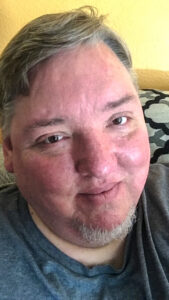 Original CIRI enrollee Richard Perry (Yup’ik and Athabascan) describes himself as an artist, writer and storyteller. “I’m also a story listener,” he adds. “Everyone has a story. I’m really fortunate that in my career I work with and serve people who have creative minds and interesting things to share.”

As a program associate with The CIRI Foundation (TCF), Richard said he landed the job he “always wanted.” “It aligns with my sense of values and with loving art and education,” he explained. “I believe in what we do as an organization—helping Alaska Native people further their educational, career and artistic pursuits.”

Growing up in Louisville, Ky., Richard says he did not have a strong connection with his Alaska Native heritage. His parents divorced when he was a toddler, and Richard stayed with his father after his mother and sister returned to Alaska.

“The only thing I knew about being an Alaska Native person was that I was a CIRI shareholder,” Richard said. “My mother got sick in 2004 and I went to Alaska to help care for her. I’d been attending college off and on for years, taking classes when I had the time and could afford it. I didn’t have a college degree or any idea of what I could do for work, but I really liked Anchorage and decided I wanted to stay.”

Richard put in for a job with CIRI and was directed to Cook Inlet Tribal Council (CITC), a CIRI-affiliated nonprofit organization, where he worked for 10 years. With financial assistance from The CIRI Foundation, he was also able to earn a bachelor’s degree in philosophy from the University of Alaska Anchorage.

While at CITC, Richard began dipping his toe in the Anchorage arts scene. In 2011, he was introduced to theater through the Alaska Native Playwright Project, a mentorship program at the Alaska Native Heritage Center with Native Voices at the Autry—a program of the Autry Museum of the American West. In 2014, he co-founded Dark Winter Productions, an ensemble theater group promoting Native playwrights, directors, and actors. And in 2016, he completed an Artist Residency at the Tyrone Guthrie Centre in Ireland where he completed a draft of a full-length play.

After returning to Alaska from Ireland, Richard and some friends organized a cooperative called Shared Universe where writers, artists and others in the arts community can share skills and learn from one another. Most members of the cooperative are Alaska Native people.

“The idea, and what I felt was important for Shared Universe, was that it’s important for me to be able to share stories that are real, that speak to Alaska Native people. It is a space that’s for and by Alaska Native people, where they can see their faces and hear their stories,” Richard explained. One of the projects the group is working on has twice received TCF Heritage Project Grant funding, which supports projects that affect and/or involve Alaska Native beneficiaries of CIRI and further the heritage goals of TCF.

After CITC, Richard landed a job as a public-relations specialist with CIRI nonprofit affiliate Southcentral Foundation and then spent three years in the for-profit arena. He has been with TCF since June 2019 where his job entails reviewing applications, fulfilling check requests and writing letters on behalf of those with special circumstances.

“I really like working at TCF because it supports helping people with their education and future plans,” Richard affirmed. “Sometimes the person we’re helping is someone who’s just finishing high school and is moving on to college, and other times it’s a nontraditional student making a career change. Helping people transition to something they care about and have a passion for is important to me.” 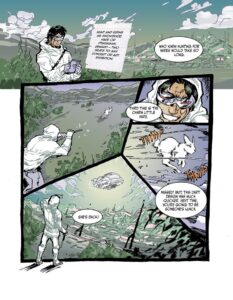 Richard is currently working on a comic based on Alaska Native folklore. He is also one of five members of the Perseverance Theatre Playwright’s Circle, which includes commission for a two-year period of time to write and develop a play. The goal of the Playwright’s Circle is to develop diverse Alaska plays and to amplify the voices of Alaska Native people and other underrepresented voices in American theatre.

“My experience of being an Alaska Native person growing up without a connection to that culture is not uncommon,” Richard said. “My wife has a similar background—she’s Inupiaq and a CIRI shareholder who moved to Alaska and came to better understand her heritage as an adult, just as I did.”

For those seeking a connection, “I think the biggest thing is surrounding yourself with other Alaska Native people, either virtually or in person,” Richard advised. “If you can connect with an Elder, that’s just some of the richest experiences you’ll have. Hearing stories and asking questions is the key that helped me better understand my culture. And working around other Alaska Native people has been very impactful. It can be difficult in the Lower 48 to connect with Alaska Native cultures, but I’ve always discovered that you find what you seek. If you put in the time and effort to foster relationships, it will happen.”