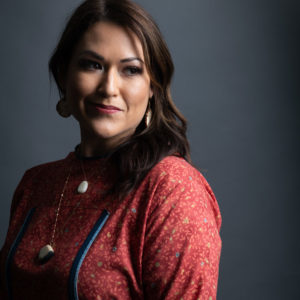 My name is Tiffany Tutiakoff and I’m Yup’ik and Athabascan, with roots in Southcentral Alaska stretching to Western Alaska. My grandparents are Reinhold Thiele and Gloria Dea Thiele, formerly of Alexander Creek and Dillingham, Alaska, and my mother and father are Gloria Bea Thiele of Alexander Creek (born in Kanakanak, Alaska) and Dennis Wilson of Anchorage.

I was born in Anchorage and grew up traversing the state with my now-retired mother, who was a commercial airline pilot. Many of my aunts, uncles and cousins also had careers in aviation. My father was born on a fishing boat in Bristol Bay and, with the help and support of family, went on to commercial fish those same waters for decades. He later became a pilot for Northern Consolidated Airlines and Wien Air Alaska.

Like many Alaska Native people growing up an in urban environment, I struggled with my Native identity. It wasn’t until I was 11 years old that I began to understand how, as an Alaska Native person, I was part of the most regulated body of people in the nation due to the construct of the Alaska Native Claims Settlement Act (ANCSA) of 1971 and the legislation that both preceded and followed it.

My interest grew while working on a school assignment in the seventh grade. Students were tasked with writing a thesis and I chose ANCSA. Studiously following my teacher’s guidance, I pored over library books, historical pictures and documents, and interviewed family members and college professors. As a young shareholder, this exercise provided the opportunity to methodically connect the dots between my heritage and legislation involving the incorporation of my family members.

Academically, I continued my education through focused studies at the University of Alaska Anchorage (UAA), minoring in Alaska Native studies. My post-secondary education at UAA and flight school were nearly fully funded by scholarships and grants provided by The CIRI Foundation.

While completing college, I began my communications career as a convention coordinator for the Alaska Federation of Natives and later moved on to CIRI as a community relations coordinator. I also started a family during this time and began a writing internship with Alaska Newspapers Inc. The internship turned into gainful employment, and for three years I developed and honed my writing skills while gaining a deeper understanding of Alaskans and many of the issues facing them.

I first gained awareness of NWS while at AFN, when together they rolled out the first and only federally funded Alaska Native-focused wellness and prevention campaign. I collaborated again with NWS while working at CIRI. Today, I am the owner of NWS. I purchased the company in 2015 and have now worked there for 16 years.

Throughout this time, I have provided award-winning, results-driven communications solutions to clients ranging from public health, tribal health and social justice to retail, tourism and resource development. The entire NWS team has an understanding of and passion for work with our Alaska Native clients, whether ANCs, tribal health organizations, for-profits, non-profits or advocacy groups.